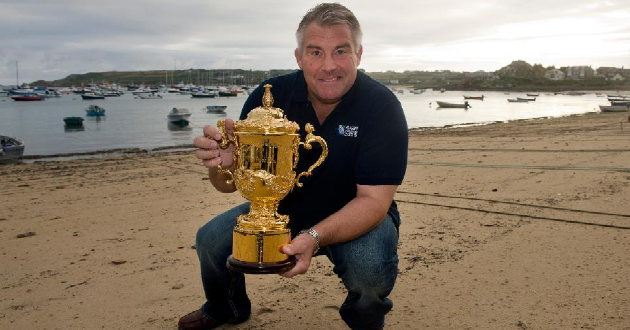 The arrival in England of rugby’s most prestigious prize, the Webb Ellis Cup, marks the start of a 75 day tour leading up to the beginning of Rugby World Cup 2015 on 18 September, 2015.

After crossing into England from Wales, one of the first to get his hands on the Webb Ellis Cup was Jason Leonard OBE, RFU President and Rugby World Cup 2003 winner. He accompanied the trophy to Five Islands School on the Isles of Scilly where he joined the Cornish Pirates for a rugby training session.

After a short helicopter ride to the Eden Project in Cornwall, both the Webb Ellis Cup and Leonard posed for photos with local school children inside one of the bio-domes, before attending a school beach rugby event at Perranporth Beach. 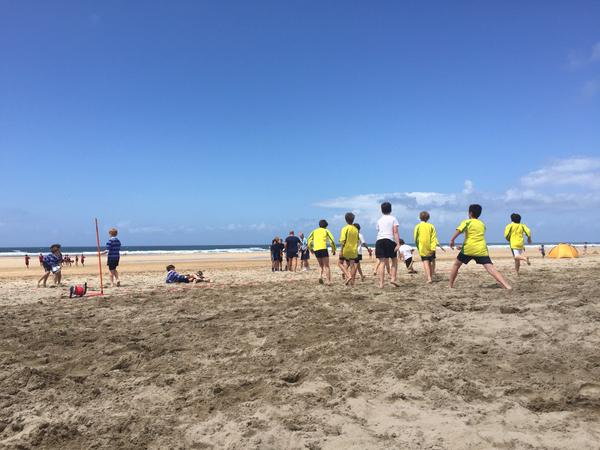 Leonard said: “This year will be the most significant in the history of the game in England and it’s an exciting opportunity for us to raise the profile of rugby through the Trophy Tour, in particular amongst grassroots clubs across the country. Rugby really is a sport for everyone, for all shapes, sizes, abilities and backgrounds – men, women, boys and girls – and it’s great to see so many people already feeling the excitement of Rugby World Cup 2015.

“I’m looking forward to the schools’ beach rugby later today to see children taking part and having fun. Three of the schools there are part of the RFU’s All Schools Programme which takes rugby into non-rugby playing secondary schools. These three schools didn’t play rugby until two years ago and are great examples of the work we’re doing to create a lasting legacy for generations to come.”

The Webb Ellis Cup reaches England after travelling the world as part of an international celebration of rugby. Japan, Australia, Fiji, Madagascar, South Africa, Argentina, Uruguay, USA, UAE, Hong Kong and China, Italy, Romania, Canada, Germany and France, have all been visited by the trophy.

Most recently, rugby fans in Scotland, Wales, Northern Ireland and the Republic of Ireland have been able to join in the countdown to kick-off as the Trophy Tour visited the home nations.

The Webb Ellis Cup will now tour around England, where it will visit each host city and host venue, as well as the team bases, local rugby clubs, community events and iconic locations across the country, all in celebration of the biggest Rugby World Cup to date.

England Rugby 2015 Managing Director, Stephen Brown, said: “The Webb Ellis Cup’s return to England marks a big moment for rugby fans as the tournament comes another step closer. The Rugby World Cup Trophy Tour will now embark on a tour of England, following on from the success of the international trophy tour of 15 countries over the last 12 months, as well as more recently 25 days in Scotland, Northern Ireland, Republic of Ireland and Wales which has engaged and inspired the home nations to be part of this fantastic tournament. We’re hopeful that the trophy trip around England will enable fans to create unforgettable memories in the lead up to the very exciting six weeks of rugby ahead.

“As the organising committee, we are pleased to be fully on track with our delivery plan. We’ve sold 2 million tickets, recruited 6,000 volunteers who will form ‘The Pack’, confirmed our 15 official fanzones and are delivering a Rugby World Cup 2015 testing and readiness programme. We continue to work hard with all our key stakeholders to ensure Rugby World Cup 2015 is a true celebration of rugby for the nation and the watching world.”

Find out more about the Trophy Tour here.