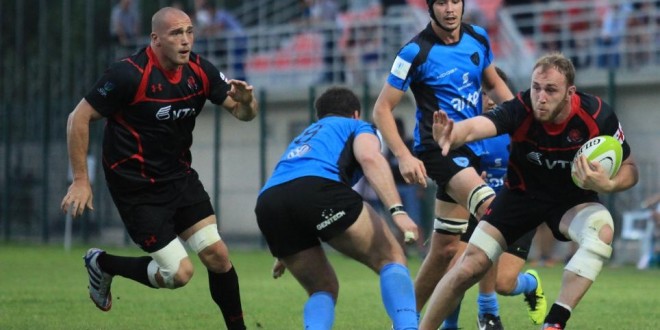 With Rugby World Cup 2015 on the horizon, Georgia have already set their sights on making it through to a fifth straight tournament, in Japan in four years’ time.

A third place finish in Pool C would not only signify their most successful tournament to date it would also enable the Lelos to bypass the lengthy qualification process and go straight into the hat for the Japan 2019 draw.

To achieve that goal Milton Haig’s will have to win at least two matches in a pool containing reigning world champions New Zealand, Argentina, Tonga and Namibia.

A win against Tonga in their opening match at Kingsholm on Saturday 19 September would put them halfway there, and the European Nations Cup champions are doing everything in their power to hit the ground running when the tournament kicks off.

“When we arrive in the UK we will spend three weeks at Surrey Sports Park in Guildford, we were lucky enough to get in before others so we are pleased with that,” said New Zealander Haig. “We will then play three warm-up games against Newcastle Falcons at Kingston Park, Canada at Esher and Japan at Gloucester. We have structured our pre-competition training programme which will help get us some momentum going into the first game which is important.”

Playing Japan in their final warm up game at Kingsholm might also just give the Georgian’s a slight edge as they prepare to face Tonga. “Japan also play their first match at Kingsholm so we are pleased to play a game there before the tournament starts. It worked out nicely for both of us. It is just another part of the preparation we have managed to tick off,” Haig added.

“Our preparation will be absolutely key and we always knew that”

Preparation for the tournament for a tier two nation is vitally important and something that Haig feels could give his side the edge over competitors in their pool.

“Our preparation will be absolutely key and we always knew that. We talked about this 18 months ago with Craig White, the former Wales and British and Irish Lions strength and conditioning coach. We spoke about how our preparation could be an advantage over the likes of Tonga, because we are closer to Europe we can prepare and get matches,” Haig revealed.

“We are using some world class facilities, we are going to Poland pre-UK into a cryotherapy facility. If we can make sure we prepare properly then we can give ourselves a chance of starting well at the World Cup which is going to be vital for us.

“Our goal, as I have said for two years now, is to qualify automatically for Japan and to do that you need to win at least two games so that is what we are working towards and everything from next week onwards to 19 September is where our

Between 36 and 40 players will assemble in the initial training squad at the training base for the first three weeks of the training camp. A few players from Top 14 will have surgery so Haig has drafted in players to make sure there is cover.

The recent Tbilisi Cup competition offered Haig the chance to look at players on the fringe of the squad. “It has certainly allowed us to look at quite a few players that have been in the frame for the World Cup. The Emerging Ireland match in particular was a big game for three or four boys to distinguish on whether they go into the training camp of 39 or not. The tournament had a lot on it because there are players playing for World Cup spots,” Haig said.

A good performance in England would back up the achievement of the Junior Lelos in winning promotion to the World Rugby U20 Championship, and further stimulate interest in the game back home.

“We have a responsibility to grow the game in Georgia and to do well in the tournament,” said Georgian Rugby Union President, George Njaradze.

“If we perform well in the tournament the amount of kids playing the game will grow. Over the years we have increased our numbers tremendously from 2,300 to 11,000. Of course we need more infrastructure, more knowledge and more education over the next four years. We hope if we perform well there will be more sponsors and more support from the government, so it is up to us.

“We are going to try and win two games, which will not be easy of course,” he added. “Tonga and Namibia are both good sides but it is possible. Then we play Argentina, a team we know quite well and of course New Zealand. Playing against them is great for us because a lot of players don’t get the privilege to play against the All Blacks so we are very proud to have this opportunity and the boys will do their best. The goals for us are very clear and we will try to achieve them.

“Automatically qualifying for 2019 will allow us to prepare solely for that tournament and not be nervous about winning every game during a qualification programme. It will be a paradise for the coaches and for the Union because we can, in a very good climate, plan the next four years, prepare our team and I promise you that in 2019 Georgia will surprise the rugby world. We will have a completely different team, playing completely different rugby with a lot of young players.”