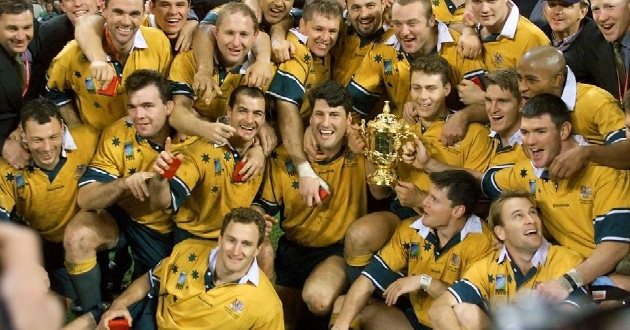 LONDON, 27 Oct – The week before Rugby World Cup 2015 started, Rugby News Service looked at the average ages of previous champions and how they had built up the experience during the years prior to victory.

Analysis showed that, among the top-ranked teams, Australia were best placed both in terms of age progression leading to RWC 2015 and the average age of their likely first-choice starting line-up (see the original analysis below).

More than five weeks later, that foresight has been vindicated by Australia’s journey to a record fourth RWC final; can they make it a record third RWC title?

A TEAM FOR THE AGES

Australia are following the same path that led them to success at Rugby World Cup 1999 (above), an analysis of average starting team ages shows.*

In the four years prior to Australia’s win in the first tournament of the professional era, the average age of their starting test side in the Tri Nations increased from 26 years and 66 days in 1996 to 27 years and 99 days in 1999.

The average age of the RWC 1999-winning side (pictured) in the final was 27 years and 321 days, just 47 days younger than the average of the four winning sides in the professional era.

Analysing Wallaby teams in the Rugby Championship between 2012 and 2015 shows that the average age of the squad starts to increase about two years before the Rugby World Cup.

Compared with the RWC 1999 winners, the current Australia team started with a lower average age two years before and accelerated to a higher one more quickly. The recall of older players, such as Dean Mumm and Matt Giteau, and the debut of Scott Fardy at 29 help to explain this change. 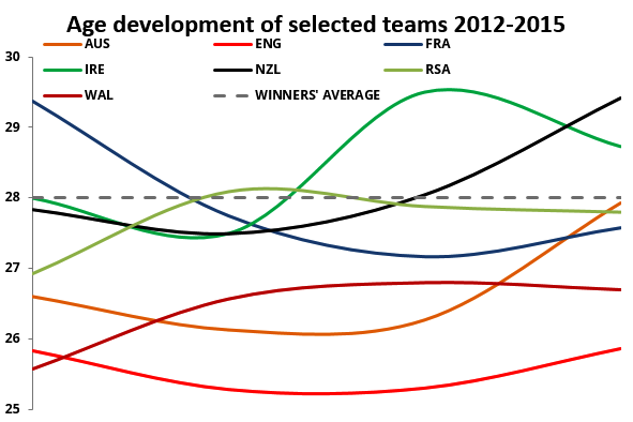 Projecting Australia’s likely selection in the RWC 2015 final shows that their average age on 31 October 2015 would be 28 years and 288 days, exactly the same as England’s World Cup-winning team on 22 November 2003. Indeed, the 2015 Australia side actually follow the 2003 England team’s progress more closely than their own 1999 side.

The pattern of an increasing average age was repeated by England in 2003 and South Africa in 2007, with only 2011 winners New Zealand bucking the trend, as their Rugby World Cup final team were six months a man younger than their Tri Nations team that year.

Australia’s squad age progression closely matches the four professional era victors. New Zealand have a similar trajectory, but the average age of their 2015 starting team is 29 years and 151 days, almost 18 months older than the combined average of the past four Rugby World Cup winners. 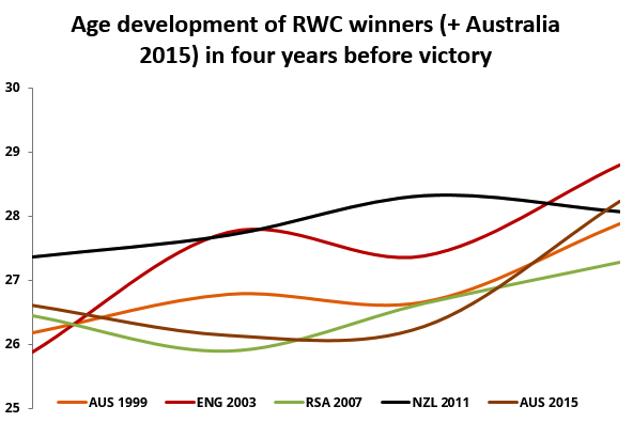 Australia’s RWC 1999 captain John Eales said his team were confident going into the tournament as they had beaten all their top competitors and matured in the build-up.

“We’d been through some tough times, so we knew what that was like,” he said about handling the pressure of rugby’s biggest occasion.

“We knew it was no given that we would win, but we were quietly confident that if we stuck to what we knew, we’d play well, then we could win the tournament.”

Australia’s RWC 2015 team have followed a similar build-up pattern, but will they achieve a similar result?

* This article was previously published on 22 September before Australia’s opening RWC 2015 match against Fiji.