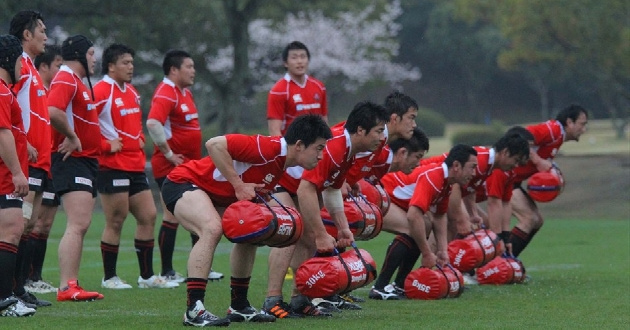 I n the second part of Eddie Jones’ interview with rugbyworldcup.com, the Japan coach talks about the pressure of being an international coach, getting the crowds for RWC 2015 behind the Brave Blossoms and trying to end a 24-year wait for a second victory.

PAIN THE SECOND PART OF EDDIE JONES’ INTERVIEW WITH RUGBYWORLDCUP.COM, THE JAN COACH TALKS ABOUT THE PRESSURE OF BEING AN INTERNATIONAL COACH, GETTING THE CROWDS FOR RWC 2015 BEHIND THE BRAVE BLOSSOMS AND TRYING TO END A 24-YEAR WAIT FOR A SECOND RUGBY WORLD CUP VICTORY.

Are you feeling the pressure yet?

There’s always pressure. It just manufactures itself in different ways. The last game we had in June, we had four weeks to prepare. The reason we had four weeks is it’s because it’s very similar to the World Cup with the four weeks. The third game of the World Cup or the third week of camp is the most difficult. People are physically tired, mentally tired and it’s when the tough gets tough and the weak fall away. We had guys here really struggling but to their great credit, they fought through it and the last week of training we had some fantastic sessions. There is a lot of stress but I’m ignoring it. I know they’re used to doing things in the past but they have to start doing things differently.

When you coach a big team there’s external pressure. You obviously get a lot of pressure from the media. When you coach an underdog team the pressure’s from within – you create the pressure yourself. So the pressure is the same. I’m older and have more experience but I feel more pressure with Japan than I did being involved with Australia in 2003.

HIGH OHPES FOR THE JAPAN WAY

You face Scotland just four days after playing South Africa. How will that work out?

I reckon it suits us. We’ve got two games in four days against two very similar countries. Scotland and South Africa are two very structured teams then we’ve got a gap against Samoa and USA that are more unstructured teams. If there’s anyone in the world that can cope with a short turnaround, it’s Japanese players. They go to high school camps where they play a game every day. So they’re used to it. I see it as an advantage for us.

“I’m older and have more experience but I feel more pressure with Japan than I did being involved with Australia in 2003.”

At RWC 2011, the North Harbour crowd for Japan’s first game against France was behind them. How can you play the crowd in England?

People at a big tournament like the World Cup like the underdogs. Probably Brighton won’t be as friendly as Gloucester because I imagine there will be a lot of South Africans travelling from London, but the other venues like Gloucester, there’s a potential advantage there. If we can start a game, get on a bit of a roll and put pressure on them we can actually get the crowd to support us.

Last but not least, can you end the 24-year winless drought for Japan?

We’ve gone through all the stats since 2012 and in proper test matches played – not the Asian Championship – our ranking is fifth in the world on winning percentages. New Zealand is first, South Africa is second and the teams underneath are unbelievable. Australia’s under 50 per cent and we’re batting about 60 per cent since 2012.

Realistically, our performance since 2012 has been good. But we have advantages in those periods because we’re better prepared than the other teams. Come the World Cup, the preparation advantage is gone because every team has three months together. They’re all fit, they’re all organised, they all have their best players. So our target for this period of time is, how can we prepare better than any other team? And that’s what we’ve been trying and that’s the only way we keep any kind of advantage. So if we do that, then we’ve got a fantastic chance to win games at the World Cup.