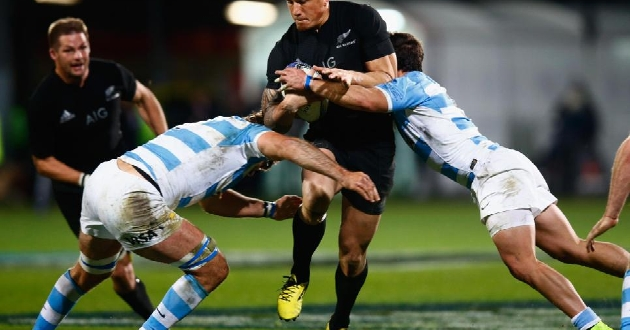 This week New Zealand celebrate a total of 10 years as the number one ranked team in the world, their current reign at the top stretching back to 16 November 2009.

New Zealand’s cushion at the top of the World Rugby Rankings has increased by 1.23 points following the opening round of The Rugby Championship 2015.

The All Blacks are now 6.70 points clear of the Springboks after their 39-18 victory against Argentina in Christchurch was combined with South Africa’s agonising 24-20 loss to Australia a day later. That defeat at the Suncorp Stadium in Brisbane sees the Springboks drop to 87.00 points while New Zealand remain on 93.70.

Australia have regained fifth place from Wales in the World Rugby Rankings, four months after falling to a new low of sixth, as a result of their dramatic come from behind victory which was sealed when Tevita Kuridrani muscled his way over the line after more than 90 seconds of added time.

The Wallabies’ victory came with a 1.23 rating points gain, putting them a fraction – or a blade of grass, to borrow Michael Cheika’s description of how tight the win over the Springboks was – ahead of Wales.

As things stand, Pool A at Rugby World Cup 2015 contains four of the top 10 ranked teams in the world, Fiji joining England, Australia and Wales in the elite group following their 30-22 win against Tonga in the opening round of the World Rugby Pacific Nations Cup. Fiji’s win in Suva on Saturday earned them 0.65 of a rating point and was enough to see them usurp Scotland who drop to 11th.

A number of other teams swapped rankings positions after a busy weekend of international rugby. Japan and Tonga trade places, in 12th and 13th respectively, after the Brave Blossoms recorded a 20-6 Pacific Nations Cup victory against Canada in San Jose, California.

Canada are now ranked below RWC 2015 Pool D rivals Romania after the defeat to Japan cost them just over three tenths of a rating point and a fall of one place to 18th. Fellow RWC competitors Uruguay move up two places to 19th without even taking to the field, Los Teros benefitting from defeats for Spain and Russia.

Spain lost 36-27 to Kenya in Nairobi despite starting the day ranked 11 places higher than their African opponents. Kenya now find themselves at an all-time high of 28th in the rankings after a two-place climb. The Simbas’ next challenge comes in three weeks’ time when they play a resurgent Namibia in the Africa Cup Division 1A.

Namibia wrapped up a 2-0 test series win against Russia in Windhoek, running in five tries to one on their way to a 45-5 victory. It followed a 39-19 victory in the first game last weekend. Conrad Marais scored a hat-trick but it was another French-based player, fly-half Theuns Kotze, who took the man of the match award after contributing 20 of his side’s points.

“We played a much more controlled game, our game management was improved. We put pressure on our opponents and I was impressed with our team’s patience, it paid off with some very good tries,” said new backs coach Pieter Rossouw, the former Springbok.

The win lifts Namibia one place to 21st – and within three tenths of Spain above them – with Russia slipping two places to 22nd after the defeat.