New Zealand won 34 of 35 matches on the tour 110 years ago, but are also back where they conceded their first try on British soil.

NEWCASTLE UPON TYNE, 7 Oct – Today marks the 110th anniversary of New Zealand’s first match in the north-east of England, the traditional round-ball code territory where Steve Hansen’s side are now ensconced ahead of their final Pool C fixture against Tonga at St James’ Park on Friday.

It was on 7 October 1905 that the original All Blacks pitched up in the city of Durham, about 30km south of Newcastle and the same distance north of the Darlington training base of the RWC 2015 team, to play the seventh fixture of their trailblazing 35-game tour of Britain, Ireland and North America.

The north-east Britain portion of the tour has also long, though wrongly, been credited as where captain Dave Gallaher’s pioneers were first branded as ‘the All Blacks’.

According to full-back Billy Wallace, the last of the 1905 team to die, the term was first used in a match report by John Buttery of The Daily Mail after the eighth game of the marathon tour, a 63-0 win against a combination of Hartlepool clubs, West and Rovers.

The story went that Buttery had waxed lyrically in his copy about the expansive New Zealanders playing not with lumbering forwards but as if they were “all backs” and that the phrase had been changed by a sub-editor to “All Blacks” because of the colour of the tourists’ strip.

However, as New Zealand rugby historian Ron Palenski established, they had been christened with the moniker even before the 1905 team set sail on their tour.

WHAT’S IN A NAME?

The phrase ‘All Blacks’ did appear in Buttery’s account of the match in Hartlepool, 27 miles north-east of Darlington, but Palenski discovered that the phrase had already been used in the local Express and Echo newspaper in a report of the opening game, a 55-4 victory over Devon in Exeter on 16 September.

The match against Durham, England’s champion county side of the time, was still a notable one. It was the first match of the tour in which the All Blacks conceded a try, with Phil Clarkson, a wing from the Sunderland club, being the name to enter the history books. 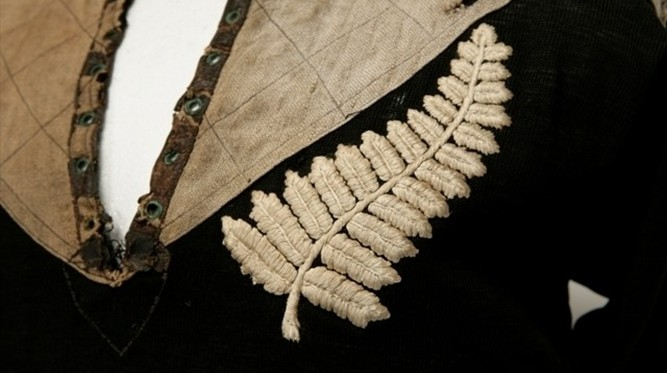 It was the only Durham score in a 16-3 victory for the All Blacks on a cold, wet and miserable afternoon at the Hollow Drift ground, with tries awarded three points at the time and the conversion missed.

Havn the north-east with a burgeoning reputation for playing a revolutionary game, with Gallaher – their Donegal-born skipper – acting as an enforcer in a new role as a wing forward, or ‘rover’, as it was known, standing out of the scrum wing swept aside all before them with six resounding victories in the south of England, the New Zealanders had arrived iith the intention of nailing the opposition half-back, and having scant regard for the offside law.

As it happened, Gallaher – who earlier had served as a mounted trooper in the Boer War and later was killed at Paschendaele in 1917 in World War I  – missed the Durham match because of a cold and Billy Stead, the All Blacks’ first five-eighth, or fly-half, stood in as captain and scored two of his team’s four tries.

The match report in the Northern Echo said that Durham had played the opening 15 minutes with two men short, forward Frank Boylen and scrum-half Jack Knaggs having missed their train connection from Hartlepool and been temporarily stranded in Ferryhill.

In later years, Wallace claimed that the match had been held up for 30 minutes while he and his team-mates were left shivering on the pitch.

“Punctually, at 3 o’clock we were sent on to the ground but the Durham team did not follow,” he recalled. “We hung around there waiting for them to come out but it was half an hour before they appeared. We were wet through and shivering with cold and not in the best condition to give of our best.”

The Northern Echo correspondent also ventured to suggest: “One may almost look upon the achievement as a victory for the north countrymen. We have heard a lot during the past few weeks about the New Zealand methods. Rumours have reached us from the south of deadly tactics, so invincible and incomprehensible as almost to savour of the occult.

“The result has been to turn the English rugby footballer, once such an optimist, into a fatalist, who thinks it was arranged before he was born that he should lose dozens of points before the rushes of the New Zealanders. But Saturday’s game should do much to dispense this delusion.

“It is possible that the check the colonials received on Saturday may be the turning point in the career of the New Zealand XV.”

It proved to be the first premature forecast of New Zealand’s demise as a rugby super power. Having almost come to grief when their steam ship, the RMS Rimutaka, was partially holed on the fifth day of their marathon 42-day sea voyage, the original All Blacks proceeded to win 34 of their 35 tour matches.

The one defeat, 3-0 against Wales in Cardiff, remains a source of New Zealand ire. The Canterbury centre Bob Deans went to his death bed swearing he had been robbed of a late equalising try when he was dragged back from beyond the try-line by desperate opposition players before the referee arrived belatedly on the scene.

“Grounded ball six inches over line,” Deans maintained in a telegram he despatched to The Daily Mail the next day. “Was pulled back by Welshmen before referee arrived.”